I did not know Steve Mercado, but he was my kind of guy. He was funny, handsome, made a mean chili and damn it, he was a hero. On September 11th he and eleven other of his firefighter brothers were lost in the World Trade Center. I imagine him charging up those stairs, intent on answering the calls for help. Intent on fulfilling his mission to save and protect. He was that kind of guy. He lived to help people. To make them laugh, make them feel like things were really okay. And I think that when Steve was around, people did feel that way.

He was born and raised in the Bronx and dreamed of playing for the New York Yankees as a kid. He played stickball in the streets with his pals – a game his father had taught him and eventually a game he would teach his own son and countless other children. A tradition he carried into adulthood.

He married his childhood sweetheart Jovianna and eventually they had two sons, Skylar and Austin. He was a dedicated husband and father and took great joy in watching his children grow. I imagine that he had a picture of his wife and kids taped inside his helmet – I don’t know it – but he seemed the kind of man who would. Who loved his life so much that he would want to keep the things dear to him close. I imagine too, that his last thoughts were of his family, what kind of men his sons would grow up to be and how very much he loved Jovi.

He was a modern day warrior, facing life and death as a matter of course. Charging in to whatever task life had dealt him – unphased and unafraid. And, I believe the world was better for Steve having been in it. He made the world a better place, a safer place, and a kinder place. He had a passion for life and it showed.

He loved stickball and dreamed of it becoming an Olympic sport one day. He was a legendary player and the President of the NY Emperor’s Stickball League. According to Steve, “Stickball is all about community. For me, I learned the game from my father, and others of his generation. They were my heroes, the role models we looked up to. Stickball was an important part in our tradition of teamwork, determination and community. My goal now is to reach out to the kids growing up today to make sure we continue to pass down these values.” 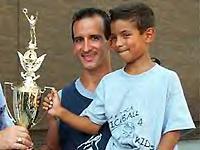 Stickball was a true calling for Steve. His wife said that he believed that there wasn’t any problem that couldn’t be worked out by a game of stickball. I think he may have had a point. Nothing like whacking balls over the rooftops and running like the wind to give you perspective. He was responsible for creating many teams across the country, starting programs for kids who might otherwise have not had the opportunity to learn about the teamwork and tradition Steve so loved. What lucky kids to have had such a great role model as Steve. He made things better, not by words but by his actions.

Steve was a man who made a difference and I believe still does. In the words of Buddha, If we could see the miracle of a single flower clearly, our whole life would change. I hope that I have in some small way shown you the miracle of Steve.

Steve’s poem to his dad:

Addendum: Sharon Cannone, Steve’s cousin was kind enough to share the eulogy she delivered at Steve’s memorial service in November 2001:

I have a lot of memories of my cousin. We grew up in the same building together and always stayed very close. A lot of memories…. But one memory in particular has been playing over and over in my mind since I learned that he was among the missing. Among Steve’s many talents a long time ago he dabbled into the world of boxing. And with just about everything else he took on, he trained long and hard to hone his skills. Well, the hard work and training paid off, because Steve qualified for the Golden Gloves and had his big night at Madison Square Garden. Steve was well represented that night by family and friends. When he entered the ring for the main event, the Garden “rocked” with applause from his fans. After the usual introductions, the fight began. But a minute or so into the fight, Steve took a punch to the chin and hit the canvas with a thud.

The moment Steve fell, I jumped out of my seat and started screaming at the top of my lungs. STEVIE GET UP!! STEVIE GET UP! I don’t remember how many times I yelled to my cousin, but all of a sudden, Steve got to one knee, shook his head, got up and beat the living daylights out of his opponent. The Garden went wild.After the fight, we all went to a bar in the City to celebrate. Steve told me that as he was lying on the canvas he heard a voice through the haze screaming his name. And that’s when the haze cleared, he said “That’s Sharon – I gotta get up”. He told me that night at the bar that it was my voice yelling his name over and over that enabled him to win the fight. I never thought I could be prouder of my cousin as I was that night — the night he fought the fight of his life. But I was wrong.

From the moment I knew that Steve was missing, I thought about that night at the Garden. Over and over I prayed, Stevie please get up. But it wasn’t in the cards this time. Even though I was joined in prayer by friends, family, the City and the whole Country. We all screamed your name Stevie, but this time your opponent was a dirty fighter who hit way below the belt.

I’ll never understand the twisted minds of terrorists who can cause pain like this. I don’t understand why some people choose to live their lives with pure hatred in their hearts instead of love. Their hatred defines who they are. Steve’s love for life, great sense of humor and truly giving heart defined who he was. He put his life on the line for his fellow man on a daily basis. And I’m very proud to have been a part of his life.

Note: For those of you in the NY area, PBS will be airing a documentary called “Bragging Rights” that covers the game and tradition of stickball. Steve is featured in this documentary and it will air Thursday, September 14th at 8PM.