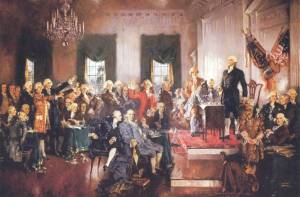 In case you missed it, the president was quoted as saying rather than criticizing him, the tea partiers should be thanking him for lowering their taxes. Hmmmm….methinks he hasn’t been keeping track of his own broken promises. This article from Investers Business Daily does a nice recoup of all the taxes that somehow slipped the notice of the prez. Emphasis mine.

Downsizing: Rather than protesting the greatest expansion of government in U.S. history, Tea Party attendees should be thanking Big Government for all it’s done. At least, that’s what President Obama thinks.

As the Associated Press reported Thursday, the president said he was “amused” by the Tea Party faithful gathering in cities across America to protest soaring government spending, ballooning debt and the explosion in taxes that will be needed to pay for it all.

“You would think they’d be saying thank you,” he said.

And why should they be thankful? As the president himself said on his weekly radio address a week ago, “one thing we have not done is raise income taxes on families making less than $250,000; that’s another promise we kept.”

In fact, that wasn’t his promise at all.

Here’s what candidate Obama really said in September of 2008: “Under my plan, no family making less than $250,000 a year will see any form of tax increase. Not your income tax, not your payroll tax, not your capital gains taxes, not any of your taxes.”

Got that? “Not any of your taxes.” The claim of no tax hikes on those below $250,000 as a result of the current administration’s policies is completely and utterly false.

A report from the House Ways & Means Committee’s GOP members notes that, since January 2009, Congress and the president have enacted $670 billion in tax increases. That’s $2,100 for each person in America. At least 14 of those tax hikes, the report says, break Obama’s pledge not to raise taxes on those earning less than $250,000. Roughly $316 billion of the tax hikes — 14 increases in all — hit middle-class families, the report says.

This comes in addition to recent data from the nonpartisan Congressional Budget Office showing U.S. spending and indebtedness growing at an alarming rate. Government spending now totals 25% of GDP, a quarter above its long-term average. By 2035, it will hit 34% of GDP at current trends — a 70% increase in the real size of government in just 25 years.

More spending means more debt. In 2008, total federal publicly held debt was about $8.5 trillion — an amount Uncle Sam took 220 years to accumulate. By 2020, that will soar to $20.3 trillion, a 139% jump. No surprise the Government Accountability Office last week said the U.S. is on “an unsustainable long-term fiscal path.”

So let’s see: The administration and its allies in Congress pass what can only be called the most financially irresponsible series of bills in our nation’s history, imposing a crushing tax burden on our children and our children’s children, while lowering all Americans’ standard of living, and we should thank them for it?

This is the delusional thinking that’s led to the Tea Party Movement’s soaring popularity. The hundreds of thousands that turned out around the country on April 15 were objecting to the systematic ruin and loss of liberty that massive fiscal irresponsibility brings.

Given all this, no one should be shocked that 52% of Americans in a recent New York Times/CBS Poll said President Obama’s policies are moving the U.S. towards socialism. It’s that serious.

The president can belittle people all he wants. That’s his prerogative. But he ignores Tea Partyers at his own political peril. They will not go away or be mollified by the usual prevarications.

Democrats ridicule Tea Party followers as yahoos, racists and illiterates, a mob willing to be led. They are anything but. Indeed, they have shown their seriousness by putting out their own “Contract From America.”

It’s a common sense document, proposing 10 concrete steps to bring sanity back to our government and make it accountable once again. Sadly, the mainstream media won’t cover it. But if you’re interested, go to http://www.thecontract.org, and see if you don’t agree.

So much for hope and change and no taxes on the middle class. WC