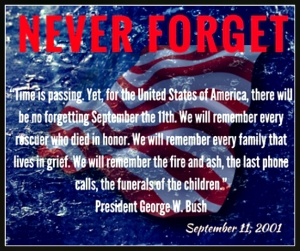 Most everyone who was alive on that day, remembers where they were and what they were doing. For me, it was one of the most difficult days of my life. Most Americans and much of the world were grief-stricken, confused and angry. It brought us together in a way I’d never seen in my life.

I, like many bloggers, took part in a Project 2996 and in the ensuing years, wrote tributes to victims of 911. But as the years have passed, the enthusiasm for never forgetting has waned. Conspiracy theories have taken the place of reverence and our national cynicism has returned. That makes my heart hurt. But people move on. It’s hard to maintain grief. It’s easier to be self-involved, skeptical and worry about your manicure than to carry the weight of a national tragedy. I’m not judging, just observing.

Even I struggle with what to say to commemorate this awful piece of American history. It seems it has all been said – and there is little I can add, if anything.

I suppose all I really want to say is that I still think about that day. I still grieve for the people who died because they were in the wrong place at the wrong time – and for the family and friends they left behind. And I hope that all Americans take at least a moment out of their day on Sunday to say a prayer for the people that we lost and for our country and for each other.