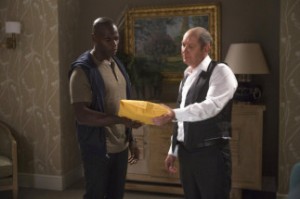 Over the last several episodes Red has been on the hunt to discover who betrayed him and was single-handedly trying to take down his business. He’s gone through a long list of possible contenders, only to find he was at yet another dead end.

If you watched Thursday night’s episode of the Blacklist, you probably experienced some serious shock when they exposed Dembe as the likely attempted killer. Even I gasped at the thought. Of all the possible suspects there could be I’d never has guessed him.

So I started thinking, why would Dembe would do such a thing? After all, he has been the recipient of Red’s largesse since he was a young boy. If not for Red, then Dembe surely would’ve died years ago. He literally owes the man his life.

Then it hit me

Where has Mr. Kaplan been since we last saw her hitch hiking out those fateful woods where she was shot and nearly died?

Yes, yes, I do think that all this business with Red’s business deals collapsing, his money being stolen and now the attempt on his life originates with Mr. Kaplan. The once faithful employee that Red believes he killed is coming back to haunt him.

Killing Mr. Kaplan was the one thing that Red did, that Dembe could not abide. So it makes sense, doesn’t it?

In future episodes we will discover that

What about you? Do you have a theory about who’s really behind the attempted coup and murder of Red? Or why Dembe would betray him? Feel free to spell it out in the comments.