Yup, got my bah humbug on.

1. All your friends are out of town so you’re stuck cooking dinner for your room mate who eats with his mouth open and does his best to make sure there aren’t any leftovers.
2. Whatever you get your mother (which you spend hours tormenting over) it’s never the right thing.
3. The tracking number to the one gift you actually need to arrive on time doesn’t exist in the shipper’s data base.
4. There’s nothing to watch on TV but bad reruns, cartoons or holiday movies you’ve seen a million times.
5. Every advertiser on planet Earth is using Star Wars as a hook.
6. No matter how much you love Christmas, you hate it by the time it’s over.
7. People apparently receive your gifts and cards but don’t feel they need to mention that to you.
8. The one or two friends who are still in town don’t believe in Christmas.
9. Since your dog loves the taste of ribbon and wrapping paper, you’ll need to schedule a $400 doggie enema the day after Christmas.
10. You spend the entire day cooking but by the time you eat, you don’t taste a thing. And you end up with heartburn.

How about you? What are your ten worst things about Christmas? Feel free to add to the list.

There’s no denying, Christmas is upon us and it’s time to get serious about shopping if you’re like me and wait til the last minute. And if you have any book lovers on your shopping list have I found some fun things for you. Following are some super cool, interesting and unique gifts you might want to get for your favorite bookworm.

VINTAGE BOOKS PENDANT in Ernest Hemingway Quote Box. Super pretty and I wouldn’t kick it out of my Christmas stocking.

Old Books Candle – If you love your eReader but still miss the smell of old books, this is a great solution. 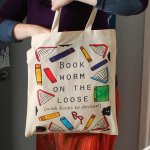 Storymatic is a unique game that helps your favorite book lovers spin their own yarns of mystery, romance and intrigue.

Banned book socks keep your feet warm and lets  you thumb your nose and book banners at the same time. Win-win. 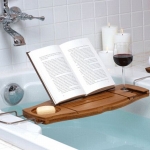 Who doesn’t like to settle into a bubble bath for a good read. This bamboo book/bathtub caddy is probably my fave.

And what book lover doesn’t want a dashboard Shakespeare bobblehead?

These special glasses speak for themselves.

Love to read in bed? Do it in style and comfort with awesome bed pillow, and yeah, if you’re asking I’ll take one.

Need something to organize all the books you have to read? This night stand holds a lot of reading material

A bedtime story duvet cover ensures you always have something to read at night.

This is so unique, a map made out of book titles, just love this.

Did you know that there is a book lovers version of Trivial Pursuit? I didn’t. And I want one. For 2 to 4 players or

And just for fun, did you know that Santa’s elves have a back up team?
Santa’s real workshop:

Back in the olden days when nobody protested Christmas displays or tried to sue people for saying Merry Christmas, or when Christmas trees weren’t considered a blight to the future of the planet, there was a cute little song called, “All I want for Christmas is my two front teeth.”

Ah, simpler times when the desire to have those important two front chompers in order to sink into the holiday dinner that was high in fat, sugar, cholesterol, calories and flavor. I miss them, don’t you?

And too, our wants are different now. If we are doing bad, we probably just want gas that is less than three bucks a gallon, or not be singled out in the security line at the airport by some lonely groping TSA agent. If we’re doing okay, we’re not sure what we want because we have grown accustomed to buying everything and anything our little heart desires. We own every gadget, media invention, and movie known to man—perhaps upgrading to a 60 inch plasma would be nice?

People complain about the commercialism of Christmas as if that is a new concept, but really if you watch old Christmas movies, you see that in 1947 they were complaining about it then too. Don’t believe me? Watch Miracle on 34th Street and you’ll see the teenage Santa wannabe Alfred say, “There is a lot of bad ism’s floating around this world and one of the worst is commercialism.” So that is nothing new, really. And frankly, I don’t see all that much wrong with it. Commercialism is what makes and sells things that we apparently want. Commercialism provides jobs. Commercialism produces movies, cell phones, music, television shows, automobiles, and every other material good, service and benefit we desire – so maybe we should stop blaming commercialism for our own relentless desire for stuff.

But regardless of what Christmas means to us, whether it is strictly religious or more just that joyous, spiritual feeling or lighthearted fun we love about Christmas, we all want something for Christmas and this is what I want:

I want Congress to quit using taxpayer money to act as selective Santa’s giving to some and taking from others. (Most of us already have parents)

I want to spend one more Christmas with my father who is deceased through some bizarre miraculous g-torsional time warp. (I know this is not possible but I still want it)

I want the people who hate and are offended by Christmas to spend Christmas week in Iran, China or Afghanistan so they can see up close and personal how they like living in a country where the government outlaws such things and possibly even things they like. (Perhaps then Christmas won’t seem so offensive to them after that?)

I want the president to refrain from signing anything into law for at least a month. (Call it a bill-free holiday for all Americans).

I want Americans to quit envying each other and to accept charity if given freely but not to expect it because someone else can afford it. (Just because someone has something you do not, doesn’t mean you are entitled to a piece of it.)

I want the media to report the news in an unbiased manner without injecting their opinions, ideology and prejudices. (Or to shut the hell up.)

I want everybody to quit trying to control everything and just let things be. (From the weather to what we eat—again, we already have parents and most of us have umbrellas and galoshes).

But more than anything I want us to be free, happy and grateful for all the many blessings we have.

How about you, what do you want for Christmas?

I don’t know about you but I am in love with Christmas. While others may complain about crowded stores and parking lots, I rise to the challenge. And though some may have a hard time deciding on what to give as gifts, my mind starts racing with a list as early as August. I love everything about it, from Christmas trees to Christmas music. I admit it, I am a Christmas addict and I am not the least bit interested in joining any twelve step program to break the addiction.

1. You think naming your first child Rudolph is an inspired idea.
2. Every year you scope consignment shops, shopping malls and thrift stores for more ornaments.
3. Tears come to your eyes the first time you plug in the Christmas tree.
4. You dream of how you’re going to decorate your house starting in July.
5. You can’t sing White Christmas without getting choked up.
6. You suddenly love everybody.
7. Your idea of a good meal is butter cookies, milk and candy canes.
8. You get your car retrofitted to look like a sleigh.
9. You get your chimney cleaned so Santa won’t get sooty.
10. You wear red every day in December.
11. You have to buy your Christmas tree on Thanksgiving weekend.
12. You’re disappointed if you don’t have lots of people on your Christmas list.
13. You have a Christmas movie marathon starting on Thanksgiving night.
14. You watch every movie you can get your hands on that is about Christmas – even the bad ones.
15. You search the internet for weird Christmas facts, food, videos and games.
16. You think elves are cuter than puppy dogs and kittens.
17. You prefer eggnog over coffee in the morning.
18. You own a Santa hat, reindeer ears and Christmas tree earrings.
19. You bake brownies, cookies and other treats for total strangers.
20. Rocking Around the Christmas Tree makes you want to dance.
21. You say Merry Christmas to everyone, even people who cut you off in traffic.
22. You love dressing up your pets in Christmas outfits.

I could actually go on and on but you get the idea. What about you? What makes you a Christmas addict? Or are you the bah humbug type who delights in messing with Christmas addicts’ minds? As usual, feel free to add to the list.

Since these little lists are popular this time of year, I managed to dig up more Christmas trivia which may help you in your next holiday game of charades.

Otay, that’s all the whacky Christmas facts I have for the moment, but stay tuned you never know when some other whacky thing will surface.