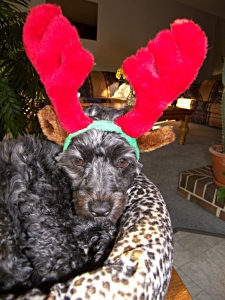 Well Halloween has come and gone so that means that it’s time to get ready for Christmas! The one time of year when most people look forward to the magic. Where velvet ribbon, gold spray paint and a glue gun can positively transform your home into a place fit for elves and sugar plum faeries.

Am I kidding? Sort of, but truth be told I’m a Christmas sap. I can’t help it. I love it. I love the tree, the songs, the cold weather, the shopping, the cooking, the eating, and the secret wrapping parties. Yup, it’s all up my alley.

But just in case you’re wondering if you too are a Christmas sap, the following may give you a clue:

If you saw yourself in any of the above points then you too are probably a Christmas sap and welcome to the club.

Here’s to figgy pudding, stars on top of trees, tinsel, over-eating and celebrating with people you love.

How about you? What makes you a Christmas sap?

Well, heckfire folks, our savior is not even in office yet and already an early Christmas has begun. This little item and this little item shows that Congress really does believe in Santa Claus since apparently they want to emulate him.

My, my, universal healthcare, mandatory tithes to the UN and while we’re at it, let’s make sure all the companies who can’t keep their shit together get a little incentive (bail out) while we’re at it, eh? Noice… it’s giving me some very good ideas. I think I’ll start a public company, mismanage it, take a huge salary and then beg Congress to bail me out instead of throwing my ass in jail. I think it’s quite the workable plan, don’t you?

Grit may be right, the world will end in 2012. I do believe the meltdown is coming fast folks, implosion city no longer seems to be a sparkling bauble on a distant hill. Nope, it’s just down the street now.

Well, all I can say is Merry Christmas GM and thanks Congress for giving us a final farewell gift (for which we will undoubtedly be able to blame Bush) as we rapidly approach the end of the winter session. At least I hope it’s rapid, God knows we can’t afford too much more of your generosity – we have presents to buy too you know? Of course maybe we’ll get some discount coupons for something off the back lot as some sort of incentive to balance out all the increased taxes you’ll lay on us in order to pay for all these gifts, eh?

I think you may have to practice a might more to really get the Santa personna down though, specifically the lumps of coal angle, check the subject index in the Santa Handbook for that one. Just a tip. 😉