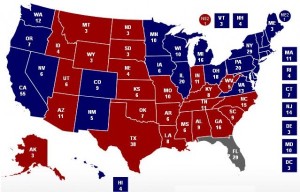 While everyone is driving themselves mad trying to figure out what went wrong for conservatives on Tuesday night and coming up with one ridiculous theory after another, most people are missing a very vital detail.  Although Mitt Romney came up about 3 million votes short (according to estimates of voter numbers) Mr. Obama lost 10 million voters that he had in his first election.   Think about that, does that constitute any kind of mandate? Hell no, Harry Reid,  it doesn’t.  And what’s more it says that he lost constituents across the board.  To have lost that many voters means to me that he will not be given the same blank check he got in his first term.  In fact, all he got was more time to ‘fix things’ in the words of his supporters.  He just didn’t have enough time to fix all the things that were wrong when he came into office the first time.  That is all the voters are giving Mr. Obama – time to fix it. Not a longer leash to drag us further into the toilet and under the rule of the United Nations.

So while we’re all running around blaming ourselves for not being ethno-centric enough, or female friendly enough, or appealing to the iPhone generation enough and blathering on about multi-culturalism and diversity, we are missing the fact that the electorate ain’t to dang happy with Obama either.

It’s not our demographics, (too many old white men? Seriously, did you just say that?) or our views that are alienating people, it is us going soft on our own principles of Economic Freedom and Personal Liberties, and Equal Opportunity for all Americans.  This ridiculous idea that surfaces every time we lose an election that says we have to become more like liberals if we want the party to survive is annoying as hell and I want you guys to all stop that.  Because it just isn’t true.

And while we’re on the topic of squishy…this guy  has to go. That Obama was reelected in no way establishes as a fact that the American people want Obamacare.  As this poll shows among many other interesting things.

For my money this guy  should be Speaker of the House and the fact that Boehner is so dismissive tells me he might be a little worried that that very thing might happen.  Paul Ryan would certainly have my support if he decided to challenge the current speaker for the position.

Now we know all you guys up there on Capital Hill think that now the election is over you’re all just going to go back to slinging mud, go along to get along and profess to mandates that don’t exist and we, the little people, are just going to throw up our hands and let you – but you should think again.  None of you has earned a mandate or bragging rights in this election and we all know that – so do you.   Realize that you have awakened the sleeping giant that is the American people and you’ll be hearing from us on a pretty regular basis from here on out.

Despite the grumblings I am reading on the Internet on various forums and conservative sites, there was nothing wrong with our candidate except that he believed in fair play and honest tactics to win a race fair and square.  His downfall and ours was that we aren’t willing to win at any cost.

At least, if you are to believe some people that was our problem, others say that our problem was not being ethnic friendly enough, not enough tech-savvy, not reaching out to this group or that.  Not seeing the plus that Obama got out of Storm Sandy (Really? A hurricane won Obama the election?)

Personally, I believe that it goes much deeper than these and many other reasons being offered.  To put it succinctly: The error in Romney’s campaign was that he was off a couple of percentage points on that 47% thing – and also didn’t realize that that couple of percentage points meant that he could not campaign appealing to reason and rational thought – but rather should have campaigned to fear and feelings. Yes, you read that right, fear and feelings. If you look at the exit polling data you will see that ’empathy’ ranked high on the reasons why Obama was reelected. Because people ‘felt’ he understood them more and their problems. I suppose that should have been obvious, hell Bill Clinton’s “I feel your pain” won him two elections. And the sad truth is that more people feel in this country than think and that was the elephant in the room that none of the conservatives figured out.

In going forward I say we dispose of this ‘can’t we all get along’ crap that the talking heads are spewing and just say, NO!  Unfair you say? Well when the libbies lose, they don’t reach across the aisle, ever. They revolt. So then, so should we.

We should go on strike. We should resist. We should say no. We should be true to our principles of economic freedom and personal liberties.  Not agree to further loss of our Constitutional rights nor march into societal servitude.  If we do so, I think they will be surprised to discover that the Santa Claus era will soon end. Since Obama now has nothing to stop him from executive-ordering his way and this country into utter ruin, then ruin will come. And not too many freebies will come from those ruins because there won’t be much left to loot and pillage. And what little remains will certainly be reserved for the self appointed kings and queens of this once great Republic.

The country will crash; there is no doubt of that. So, we of the self-sufficient genes, will look after our own, prepare, and go about our business – while the craven needy masses ultimately tear themselves apart because the gravy train has run out of rations. When the smoke clears then perhaps we can start again.

And then that bright tomorrow that Mitt Romney spoke so eloquently of will be there for those of us who could envision it from the beginning.

The last four years have been hell and I don’t believe anyone can look me straight in the eye and deny that.

You wanted change four years ago and you got it.  I say it’s time for change again.  We will not have a do-over on this one. This is our do-over. Make it count.