First, I’d like to say thank you to all of you who expressed sympathies about losing my dog Maggie last week. I can’t tell you how much it meant to me except to say, it meant a lot. So, thank you to everyone.

Going against my natural instincts, I decided to adopt another dog, rather than wait. I think that Maggie would’ve been happy about that. In fact, I am too. Because out of the deep sorrow I felt at losing my dog of 13 years, I am now feeling immense joy from the new puppy. Lily.

I will always have the old memories of Maggie – she was a remarkable dog – a remarkable ‘person’ and can’t be replaced. But Lily is a little white bundle of joy and I look forward to making new memories with her.

If you have lost a beloved pet, I empathize with you. Deeply. It is a profoundly sad experience. But if you are holding off in adopting a new pet, don’t. Please, don’t. There are so many wonderful animals out there just waiting to find a loving family. And you could be that family.

Last night I lost my dog Maggie. She was three months shy of her 13th birthday and though a little creaky and long in the tooth, she had more energy than any 10 people in the room.

I got her when she was five weeks old and we’ve been through many adventures over the years. Some good. Some bad. But she was always there, right by side, raring to go wherever I went. And many times, it seemed she was the only friend I had in the world. And believe me, that was enough. No matter how bad things got, I always knew there was one ‘person’ in the world who truly loved me no matter what shape I was in. 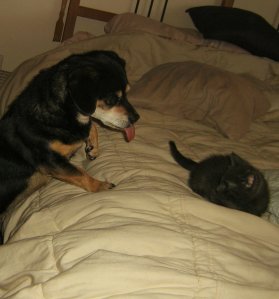 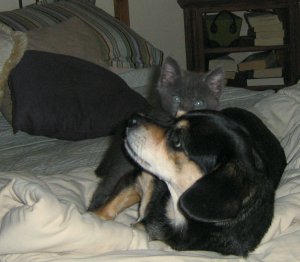 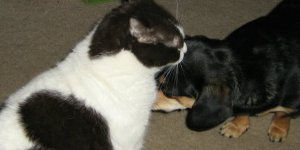 Going for a ride

Going for a walk

Sleeping on my bed

Bunching up my rugs

And if you scratched her chest, she’d stand on her haunches for hours – just to make it easier for you. 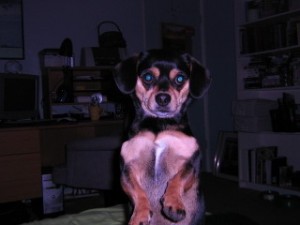 Anybody who ever met her, loved her. You just couldn’t help yourself but fall for the funny little dog who seemed to have a permanent smile on her face.

Dog food (people food was so much better)

Anybody who scared her cats

Going to the vet’s

Being dressed in elf, Santa, or baby outfits (although she loved her jingle collar every year) 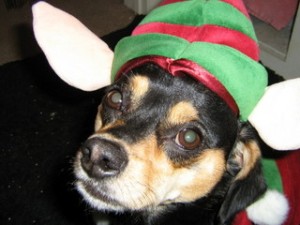 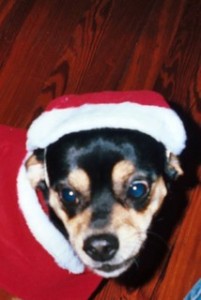 Last night, she went out into the backyard and charged an unwanted guest. I heard her barking, but I thought it was the possum she was barking at. The one who likes to climb along our wall. It made her happy to bark at the possum, so I didn’t call her in.

Then the barking stopped.

Then my room mate screamed my name.

The unwanted guest in the yard was a coyote.

We rushed her to the emergency vet. She was struggling to breathe but she was awake and alert and moving. I thought she’d be okay.

But the vet was taking too long to talk to me and I knew. The injuries were too severe. Her windpipe had been punctured. She had too many injuries. My white shirt was soaked with her blood.

We said goodbye and then she was gone.

My life was better because she was in it. My life will never be the same now that she’s gone. I will miss her more than I can say. A day just for dawgs? Maggie and Emma think that’s super. Make a dog happy for life – adopt her from a local shelter or rescue. You won’t regret it. Dogs really are a man’s and a woman’s best friend. 😀 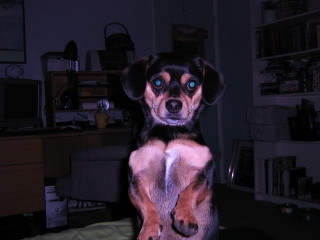 Yes indeed, I am the proud owner of same. No, wise guys, not for me…for my dog. It all started last weekend. My little dog Maggie is very cute and hard to say no to, so when Roomie and I were chowing down on some ribs last Saturday, I consented to give her one small rib bone.

I knew I shouldn’t have done it but those puppy eyes always get to me and she’s such a sweet little pup, I love to make her happy. So off she went and chewed and chomped to her heart’s delight.

The next day she wasn’t feeling so good and I regretted giving her the bone because she was clearly having trouble doing her business. So I massaged her belly and gave her a little vegetable oil and things seem to right themselves later in the day. And that was the end of that. Or so I thought.

A couple of days later I could see she wasn’t herself and was in distress – by Tuesday night she was having trouble walking and I became very worried. The next morning we took her to the vet for an enema. Much as I knew she wasn’t going to like it, I knew it had to be done and that she would experience relief from it, so we went.

What is it about vets that makes them want to scare the daylights out of you when it comes to your pets? Before I knew it, he had talked me into giving her xrays because God forbid there might be some maniacal, foreign object in there that could cause her to spotaneously self-combust. And three xrays no less – this dog weighs 20 pounds and fits in my lap – he needed three xrays?

So I wait  hours for them to call. Funny that he was so concerned that she needed xrays yet she sat for three hours before they could get to her to do them? Anyway, he finally calls and reports that there are no foreign objects in there but she’s pretty impacted. Hmm…now isn’t that what I said? So I told him to please do the enema. Still, he wants to explore the possibility that she has some sort of hip or back problem which is causing her not to be able to squat which is the source of the impaction. Now hip the upsell compulsion of this guy I say, ‘let’s try the simplest solution first and see where that leads, shall we?’

He finally agrees to give her the enema, then insists she’ll need some subcutaneous fluids (in my distress I didn’t realize he wasn’t really talking fluid for her system, just fluids for her skin????) and of course they’ll have to watch her and examine her poop when it comes out. Again, like a fool I say okay.

I am to pick her up between 4:30-5:00 pm. So I arrive at about twenty to five and then proceed to wait for forty minutes. Still distressed, growing more worried that something else is wrong because they aren’t just bringing her out. Finally I ask what’s taking so long and I’m told they are cleaning her up and I have to wait to talk to the doctor. I had had enough so I told them I didn’t need to the doctor and to just bring me my dog.

Okay, they agree then present me with the bill (oh yeah, since I didn’t have the money Roomie has covered the bill, which I’m to pay him back for). “Here’s  your receipt,” the receptionist says and hands it to me. Four Hundred fucking dollars? I heard myself say “What??????? Are you serious? Oh my God!!!!”

So, let me get this straight. My dog is constipated, I bring her to the vet for an enema, and she gets xrays, fluids that don’t hydrate her, a watching fee in which she doesnt get watched and so on? What should have cost about $100 ended up costing $400?

Live and learn I guess. And no, we wont’ be going back to that vet. Ever again. I understand that people have to make a living but to exploit people’s fears about their pets so you can pay for your Mercedes is just wrong. What happened to the vet who actually just cared about the animal and solving the problem at hand?

I wonder, if this free national healthcare thingie going to apply to my pets? What a world!

Hi Guys, have you missed me? LOL. Yeah, I know I’ve been scarce but working on becoming rich and famous takes time. 😯

Okay, so I take the pooch for our usual morning walk the other day. It was a beautiful day, the sun was shining the the sky was as blue as Mel Gibson’s eyes and life was good. We were chugging up the trail that leads toward the Angeles Crest Forest – though a road runs up there and cars often zoom by on their way to a woodland emergency (apparently), it’s usually a pretty peaceful walk. Lots of sky, lots of fresh air, hoards black-eyed Susans wave to you as you walk by, and crows screech their crazy talk as they sail overhead looking for roadkill. In a word, pretty nice.

So, anyway, me and pooch are walking along the path, me daydreaming, she dragging me like the lead mutt in a sledding team when suddenly she nearly trips me by walking backwards. Now, I have to say that my pooch, Maggie, is one talented little dog. She can jump three feet in the air, especially if a doggie treat is involved – smile, chase her tail non-stop for fifteen minutes and even retrieve her new pink tennis ball and bring it back to me….sorta. But walking backwards was a new trick and I had to stop what I was doing – daydreaming – and see what the deal was.

Well, apparently, there was a woman walking on the other side of the road and somewhat behind us. She seemed harmless enough – middle-aged, donning sneakers and sweats and hair in a pontail – possibly even a baseball cap on her noggin. Like I said, harmless. But Maggie would not take her eyes off this woman. I’d walk, she’d stop and pull me backwards and I’d see the woman that she was staring at. I kept reassuring Magie that it was merely a soccer mom out for her morning constitutional but Maggie wasn’t buying it. Clearly, she believed the woman to part of a secret FBI operation or a drug ring and knew she had to keep her eye on the chick.

At one point, the woman crossed the road and stopped at the railing to look down at the riverbed. I wondered if we were freaking her out by being so uber-aware of her and felt a little embarrassed to be honest with you. But soon enough, she was walking again and Maggie just flat out refused to do anything but watch the woman. Finally, we just stood there and watched as the woman passed. Odd though, because she never once looked at me or acknowledged us in any way. Customarily, in these parts, if you see another person walking when you’re out and about, they say ‘Good morning’ or something. But nope, this one just kept on walking. And I swear I heard a little bit of that Twilight Zone music as she ambled by.

I’m starting to think she was an alien clone and Maggie just wanted to make sure we didn’t get beamed up to the mother ship. You gotta love that doggie radar.