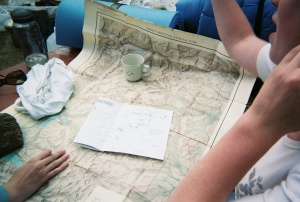 Okay, so a while back, I wrote a post about being a proper writer and completing an outline before jumping into the new novel.  Well, I was true to my word and I completed the outline which clocked in at 50 pages.  And it has all the bells and whistles and outline could want to have; character profiles, menus, pictures, recipes, common Cuban phrases, red herrings, manner of death, autopsy results, sub-plots and of course, a chapter by chapter summary of what happens.  Truly, a thing of beauty.  And I have to admit I was quite proud of myself for sticking to the plan committing this blueprint to paper.

And then I started writing…

Except something happened as I began to write.  Something I didn’t expect but probably should have.  The characters have refused to stick to the plan.  Now how do you like that?  After everything I’ve done for them, they are going off in different directions and saying things I didn’t want them to say and doing stuff that was not in the script.  And no matter how much I ask them to behave and try to convince them that my plan is better, they clearly have plans of their own and really it’s like herding cats.  After a while, you just realize that cats can’t be herded and you have to let nature take its course.

Surprises can be good when you’re writing

In the past my ‘process’ was to create believable and likeable characters, give them a premise and then let them figure it out.  It seemed to work well but then I would get notes on how I really should stay inside the lines and follow proper protocol on novel writing.  So, I decided I would give that a try and though I don’t regret the time spent on the outline and it will certainly help, I’m starting to see that though in-depth outlining may work for other writers that’s not really my way.  In fact, it kind of takes the fun out of it for me.

Oh, for sure, I’ll use the outline because It gives me the framework of the story and I have my clues and details noted so I don’t lose my place and can remind my characters of the direction they should be looking in.  But you know what, surprises can be good when you’re writing.  It can keep your interest high and makes you look forward to the task everyday.  Like, “gee I wonder what the girls are going to do today,” you know?  And I really believe that it doesn’t really matter how you get there, but that you get there.  And also, if I’m having fun while I write the story I don’t think it’s a leap to believe that my readers will have fun while they are reading the story.

My focus has been wrong

You know for years I’ve studied writing, writers and writing methods.  There is a ton of conventional wisdom out there and I’ve done my best to obey that.  Even to the point of forcing myself to conform to what the ‘experts’ say you must do.  Naturally, I want to succeed as a writer.  I want to be the best writer I can be and so it seemed logical to listen to those who knew, who had succeeded, whose books everybody reads.  And yet…maybe not.

The thing about conventional wisdom, in any field really, is that it once was not conventional wisdom.  It once was unheard of and a flagrant violation of the rules.  But the people brave enough to break the rules became the leaders of their fields later on.  And I’ve spent a lot of time chastising myself for breaking the rules and my biggest sins are:

But now I think, “So what? So what if I break the rules?  So freaking what?”  And I’ve realized that my focus has been on the mechanics of writing and that’s wrong.  Yes, mechanics are important, they make things work but they aren’t nearly as important as the message or the story.

If you knock it out of the park, who cares how you did it?

Although, in the possible future, some English teacher is going to care about how you wrote the story you wrote – parse the sentences, find the symbolism and break down your brilliance and then teach it to aspiring writers – that really should have no bearing on how you approach your story.  The thing  you should be concerned about is knocking it out of the park.  Writing the very best story you can write and let nothing and nobody from deterring you from that goal.  Writers write.  That is the purest and simplest truth about writing.  And if you’re a writer that is what you should be doing.

If you need an outline, write one.  If you do better flying by the seat of your pants, then do that.  If you need to research beforehand, go ahead – but Google is always there if you don’t want to.

The rules are great and they serve as guideposts for us to help us from losing our way, but the point is the journey, not the road map you use.  Just take make the trip in the way that you can.  Who knows, if you decide to just jump in and break the rules and follow your own process you might find others following your lead.