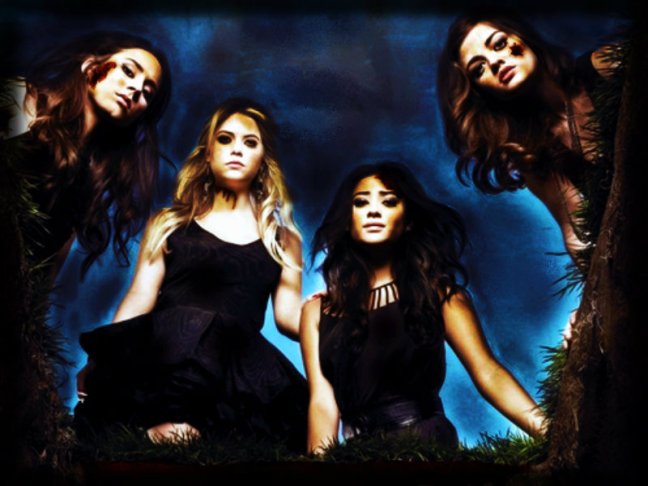 I don’t know about you but I am positively addicted to the show Pretty Little Liars. I stumbled onto this show meant for 20-somethings and was hooked from the first episode. And every Monday night I am jones-ing for the next episode which airs on Tuesday. When the show is on hiatus, life just doesn’t seem the same and I find myself on message boards debating the one and only question fans want to know: Who is A?

A few days ago, People published a teaser article entitled Pretty Little Liars Star Keegan Allen: I Know Who ‘A’ Is … and So Do You! because it showed up in my Facebook feed, I had to read it. Which lead to another article on PLL entitled 5 Mind-Blowing Pretty Little Liars Fan Theories About “A”  Seduced by this never-answered, unending question, I read the comments of fans’ theories. And man were there and are there theories about who “A” is.

One of the prevalent theories is that “A” is one of the pretty little liars. Personally, I don’t think so and here’s why: In the first episode each Liar receives a mysterious text from “A” and all of them react with shock and confusion. The reaction isn’t for anyone else’s benefit because each girl is alone when she receives her text. And why if you were “A” would you send yourself a text if it wasn’t to show someone else that you received it? There’s no point in doing that.

In the three or four years the show has been on the air we have gotten many red herrings: Toby, Ezra, and Mona among them. And now Mike (PLL’s Aria’s brother) is the current herring being dangled. So of course, fans are coming up with reasons why Mike is “A” because that’s what a good red herring gets you to do – believe.

According to Marlene King the creator of the show, “A” was present at Allison’s funeral. So here’s my theory based on deduction: We dismiss all the characters who have been red herrings (Toby, Ezra, and Mona) and the liars and look at who is left. Allison’s parents, Emily’s parents, Allison’s brother Jason, Jenna, and Detective Wilden. We can dismiss a few more characters: Jenna is blind so she’s out, I can’t imagine any of the girl’s parents torturing them that way, so they’re out; Allison’s mother was a possibility but her character was killed off, so she’s out, as is Detective Wilden who is also dead; the only left is Allison’s brother, Jason.

To me, Jason makes perfect sense. He hated his sister Allison and by association the liars because they were just lesser imitations of Allison in his mind. Allison was also favored by his parents so he never got the love that Ally did. So there’s his motive. He had access to Ally’s room, her computer, her phone, diaries, conversations, etc. Additionally, since they live next to Spencer and Ally’s room faces Spenser’s it’s a prime location for spying. It would be so easy for him to hack her WiFi and put cameras or mics in her house when no one was around. And he is ubiquitous – always lurking in the background. Further, Jason often mysteriously disappears and when he returns his explanations are flimsy and offhand – yet no one really questions them. Most recently he came onto and seduced Hannah’s mom, Ashley. Was he really attracted to her or just hoping to get a peek into Hannah’s room? Or load a Trojan horse program on her laptop?

I think I’m right. I’d be really jazzed if it turned out I was. And I have other theories about other things, which I’ll discuss in another post, later.

So that’s my theory. I’m sure you have one too. It probably doesn’t agree with mine but hey, feel free to tell me where I’m wrong and who you think “A” is – you might change my mind. All theories welcome, come one call all and have a ball.

Meanwhile, can’t wait to see what they spring on us tomorrow night.

8 thoughts on “Obsessed with Pretty Little Liars? Me too. Who do you think is “A”?”